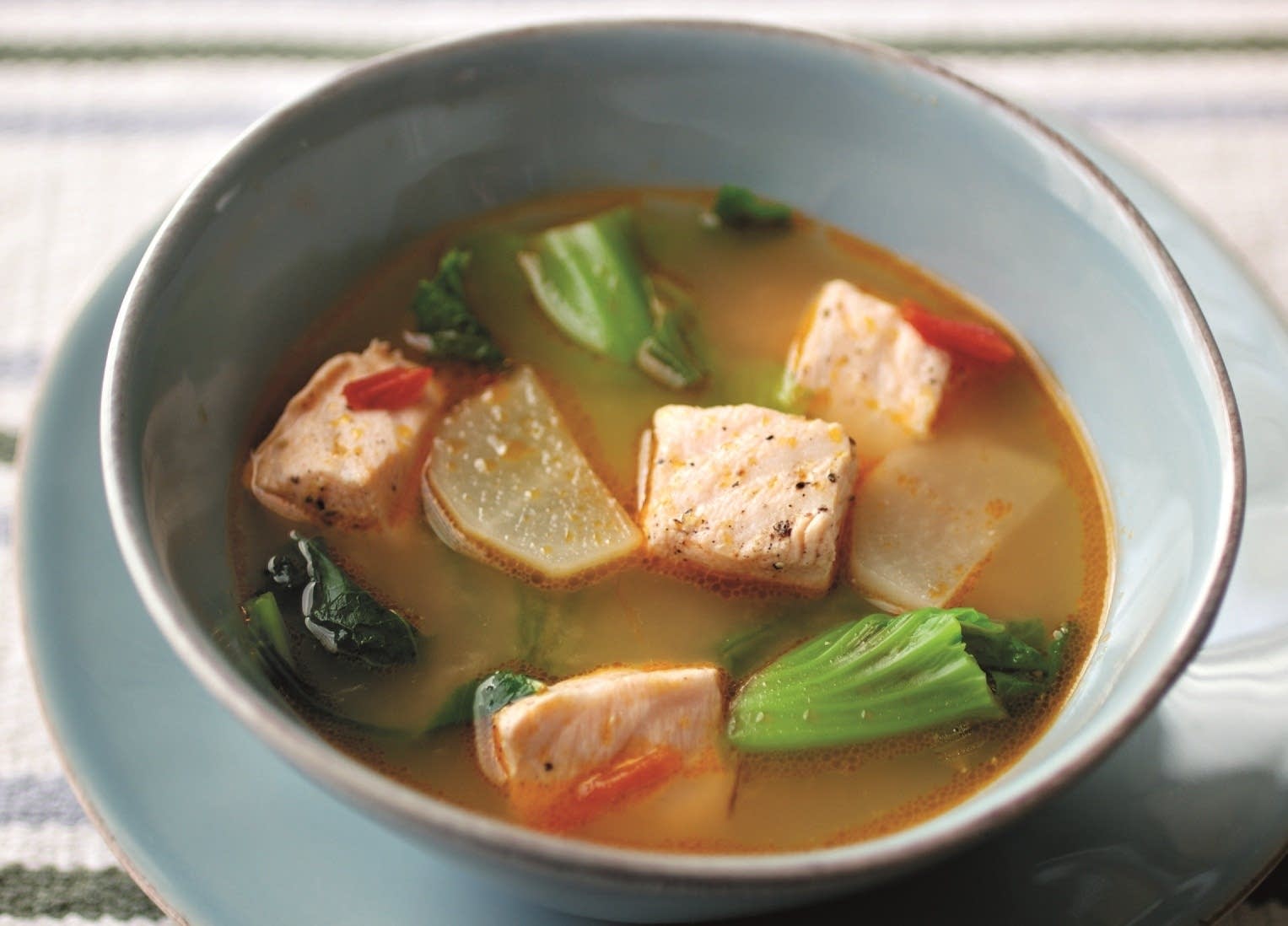 With a split salmon head, or two, peeking up from a savory miso broth, sinigang with salmon and miso is perhaps one of the most popular variants of the Filipino sour soup. My version is a simple, yet delicious, rendition that features cubed salmon ﬁllet in place of the heads. In addition to the hallmark sour notes provided by the tomatoes and citrus juice, white wine adds another layer of ﬂavor and acidity to the soup as well. Miso can be found refrigerated in Asian markets and large supermarkets. It's important to not boil miso, as high heat diminishes its ﬂavor -- add it at the end. If you have a hankering for ﬁsh heads, then by all means, throw a salmon head into the pot and simmer away.

Possible Origins of Miso and Salmon Head Sinigang: While the use of miso and salmon in a tart Filipino soup may seem like the machinations of a modern day, fusion-crazed, food blogger (ahem), the combination has been a staple in the Philippines for at least a few decades. Although Japanese traders settled in the Philippines as early as the twelfth century, it's more likely that miso became a common Filipino ingredient following the Japanese occupation of the Philippines during WWII. However, this dish likely predates the war: During the 1920s and '30s, Filipino migrant workers along the American West Coast found seasonal work in Alaska's salmon canneries. These Filipinos, who became known as "Alaskeros," worked the salmon canneries alongside Japanese migrant workers. Because miso would not ﬁnd a place in the Philippines for at least another decade, and because salmon scraps were probably readily available to the Filipino and Japanese cannery workers in Alaska, it's quite possible that miso and salmon head sinigang was ﬁrst enjoyed in the United States, and not the Philippines.

Heat the oil in a large pot or Dutch oven over moderately high heat. Add the onion and garlic and cook until the onion is tender and translucent, 3-5 minutes. Add the tomatoes to the pot and cook until the tomatoes soften and release some of their liquid, 2-3 minutes. Pour in the white wine, stirring to scrape up any browned bits from the bottom of the pot. Increase the heat to high, and boil the wine until reduced by half, 3-5 minutes.

Stir in the water, ﬁsh sauce, calamansi juice (or lemon juice, if using), and daikon. Bring everything to a boil, and then cover and simmer over low heat until the daikon is tender, 10-15 minutes.

Ladle about a 1/2 cup (125 ml) of the liquid from the pot and into a small bowl. Add the miso to the bowl and whisk until the miso is completely dissolved. Pour the miso mixture into the pot and stir to combine.

Season the salmon with the black pepper, and then add the salmon and the mustard greens (or bok choy, if using) to the pot and gently simmer until the salmon is just cooked through and the greens are wilted, 2-3 minutes. Remove the pot from the heat.

Taste the soup and add more calamansi juice (or lemon juice, if using) if more sourness is desired, or add more miso if a more savory ﬂavor is desired.

Serve immediately with steamed white rice on the side.