4 Thanksgiving recipes from Bon Appetit that are not pumpkin pie

by Lynne Rossetto Kasper
Listen: 4 Thanksgiving recipes from Bon Appetit that are not pumpkin pie
08:23 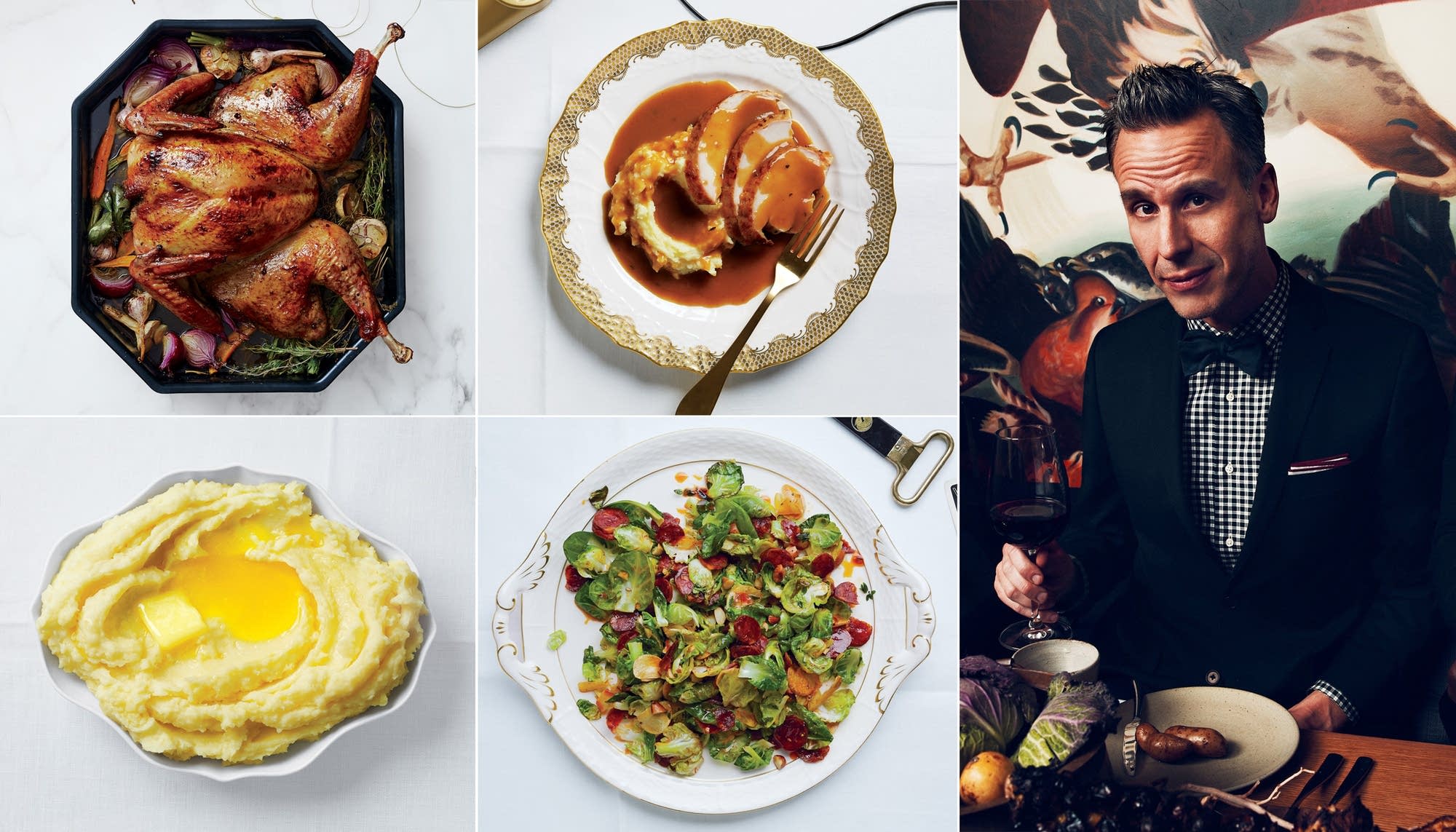 This Thanksgiving Adam Rapoport, editor in chief of Bon Appétit, is taking a stand against pumpkin pie. "I don't want to eat it," he says. "I'm done with pumpkin pie. I'm calling it right here."

Bon Appétit shared four non-pumpkin pie recipes for Thanksgiving: Spatchcocked Turkey with Anise and Orange ("The Turkey That Will Change Your Life (No Joke)," according to the magazine's cover), Rich Turkey Gravy, Extra-Buttery Mashed Potatoes, and Brussels Sprout Leaves with Chorizo and Toasted Almonds.

'The best part of the turkey is the skin'

Lynne Rossetto Kasper: I've got to hear about the turkey that's going to change my life.

Adam Rapoport: It's going to make your life so much better. This year we're doing a spatchcocked turkey, which is essentially a butterflied turkey. If you ever have had chicken under a brick, that classic Italian meal where you flatten out the chicken, we're basically doing the same thing but with a much bigger bird.

What this allows you to do is cook the turkey a lot quicker. Ours took about 90 minutes as opposed to maybe up to 3 hours for a 12- to 14-pound bird. You get the nice, juicy breast meat with the cracklin' crisp skin without the breast meat drying out. If a turkey is in there for 3 hours, as we all know, that breast meat can get kind of dry.

LRK: That's a great idea because you're exposing all of the skin to the heat evenly. I have to say, the best part of the turkey is the skin.

AR: I think we can all say that -- come on, let's be honest. I think the best part of the turkey is the skin, and then the gravy you make from all the drippings, the bones and whatnot.

'A good gravy will solve all your problems'

AR: As we put in the magazine this issue, a good gravy will solve all your problems. If you have a great gravy, you can ladle it on everything on your plate and everything's going to taste a lot better.

LRK: I think you're right. That's where the work really should be done. What is the secret for great gravy?

AR: I learned this from my mom, from whom I learned pretty much everything when it comes to food. I think a couple things with gravy.

You've got to make a good stock. That's something you could do a week ahead or a month ahead. Buy a bunch of turkey parts, make a basic mirepoix, chop up vegetables and just make a basic, good stock. You can even use chicken stock, that's alright. But if you make a turkey stock, even better. Put it in the freezer, just put it away and just wait for Thanksgiving Day.

The one thing about gravy is you can't do it in advance. You can make your stuffing in advance, your sweet potatoes, your mashed potatoes, all that sort of stuff. As the French would say, gravy is something you need to make à la minute.

When the turkey is resting and on the cutting board, take all those drippings, toast some flour in a pan and pour in the fat to make a roux. Whether it's butter or some sort of fat, it gets that caramelly-brown color. Then you just start to whisk in the stock and you get a beautiful, dark, rich, creamy gravy. You take those drippings from the pan to fortify it -- that's all you need.

It's something you have to make right before you sit down. As we say, focus, concentrate. If you screw up the gravy, you're going to have a lot of unhappy guests.

LRK: You have so many options in this menu. One of the things I really like is all the sides can be done ahead. So you're not focusing on sides, you're focusing on the bird just to make sure it's done right. Then you've got that gravy. But there's something else you mentioned that I think is one of the great traditions: mashed potatoes.

AR: Is there anything better? No.

LRK: No. But is there any new take on mashed potatoes?

I was down in the test kitchen in July when we were testing all these recipes. Dawn Perry, one of our test kitchen editors, was like, "Adam, taste these two mashed potatoes."

I tasted the first one, and it was a light blond color. I was like, "That's pretty good." It tasted like the ones my mom made.

I tasted the second one, which was a deeper yellow. I was like, "Wow, that's really flavorful. Did you make these in chicken stock or something? Where does that richness come from?"

Dawn said, "No, no, no. The first one was Idaho russet potatoes, your classic baking potatoes. The second one was Yukon Gold." Good Yukon Golds just have that richness, that almost chickeny flavor, and a little bit of sweetness to them -- that just makes a huge difference.

Start with the good potatoes. When you're boiling the potatoes, you want to get rid of that excess moisture. One thing I always love to do, after you strain the potatoes, put them back in the pot over a low flame and let all that steam and moisture escape from them. For about a minute you're stirring them around. You don't want moisture from water, you want moisture from warm milk or cream and butter. Then you put them through a ricer or food mill, stir in that butter and cream, get it just right, add salt and pepper -- I think that's all you need.

If you want to, you can put some garlic cloves in the milk as you're warming it up on the stove, maybe some herbs. Personally, I don't think it needs it. You have so many other flavors going on your Thanksgiving plate. I like the purity of mashed potatoes.

A cool little trick that our test kitchen advises -- say you make the mashed potatoes ahead and you have them on the stovetop staying warm. What we recommend is before you drain that water out from the boiling potatoes, take a cupful of that starchy, rich potato water. Then when you're ready to serve the potatoes and you're warming them, just pour that in there. It reconstitutes them and gives them a nice moistness that they lose if they've been sitting on the stove for an hour, even if they're not over heat but just sitting there. Stir it up and you're good to go.

LRK: There's something I have to take up with you though, because you do not have a recipe for pumpkin pie.

No one actually loves pumpkin pie. Everyone's like, "Yeah, it's good. I'll eat it because it's Thanksgiving."

But you know what? I don't want to eat it. I'm done with pumpkin pie. I'm calling it right here.

LRK: You're a guest right now, Adam, so I feel very guilty about taking you down on this. I like pumpkin pie.

AR: You have never made a pumpkin pie in July. Stop.

LRK: Maybe there are three of us left in the country who really think pumpkin pie is fabulous.

But think expansively about desserts. You don't need six pies on the sideboard. Why not have one pie? Or we do this beautiful apple galette, like a free-form pie with a crispy, buttery, salty crust. Apples are very in season. We give recipes for these cool little custards, nut chocolate tortes, these cool, little, handmade jellies you can make.

I always get annoyed when it's like I've got to take six really thin slices of six different pies and pile them onto my plate. That's not how I want to eat dessert. I've got a few opinions, if you didn't notice.