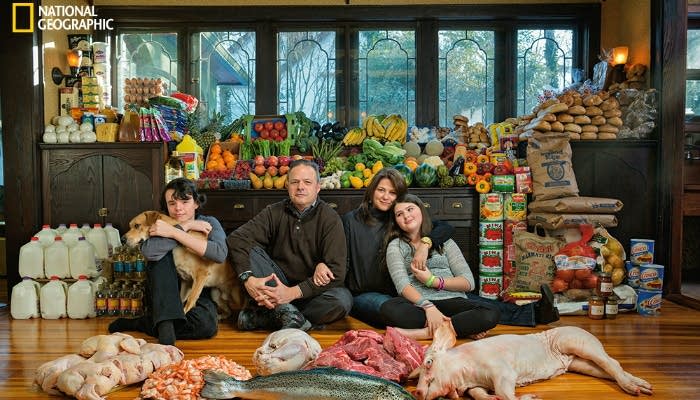 In the U.S., $162 billion worth of food goes uneaten annually. "An American family of four wastes 1,160 pounds of food a year," says Elizabeth Royte, who wrote "The High Cost of Food Waste" for National Geographic. She is the author of Garbage Land: On the Secret Trail of Trash.

[Pictured above: Spills, spoilage, table scraps, and other losses from the typical American family of four add up to 1,160 pounds of uneaten food annually. This New Jersey family, themselves avid gardeners and food composters, are surrounded by groceries representing the 1.2 million calories the average family leaves uneaten every year -- more than enough to feed another mouth. The food was later donated to a nonprofit.]

Lynne Rossetto Kasper: In the article, you begin with the lettuce harvest in the Salinas Valley in California.

Elizabeth Royte: I was in the Salinas Valley, which is the salad bowl of the nation, visiting grower-packers. After I had spent a couple of hours in the farm fields, I went on my own to the local transfer station and watched as all these trucks rolled in, dumping off giant loads of boxes and bags of lettuce, baby greens and spinaches.

I started talking to people there. I learned that between April and November, this solid waste authority landfills between 4 and 8 million pounds of these vegetables fresh from the fields. They are in this pile because the boxes or bags had been improperly filled, labeled, sealed or cut.

LRK: Do you mean all of that is going into the landfill and nobody is going to get the chance to eat it?

ER: Not if it gets to this transfer station, no. These packer-growers do donate an awful lot of food that they won't be able to sell to local food banks, but food banks can't always take all of this food. They have restrictions on how much room they have, and they don’t all have refrigerated space. There are a lot of complicated logistical issues in moving edible food to people who are hungry and need it.

LRK: If this kind of waste is just coming out of errors in packaging, why can't the packagers correct those errors? They are wasting money.

ER: I think if they realized the error was happening on a grand enough scale, they would. But it's occasional; it's the beginning of the line that comes off a little crooked, at the end of the line when they are switching rolls, things like that. It takes too much time to stop the line and make an adjustment, or open a bag and repack it. It makes no economic sense to do this sort of small handwork when you look at the scale of the operation.

LRK: We've been hearing a lot about how supermarkets have to pull perfectly edible food because of the labels like "sell by," "best by" and "use by." I'm totally confused by these labels. What do they mean?

ER: It is a very confusing situation. It's sort of a patchwork; it's not regulated on a federal level.  The labels that say "sell by" were designed to help grocery managers rotate their stock. The "use by" and "best by" more or less mean the same thing. They are indicators of peak freshness, but have nothing to do with the quality of the food. Eating it the day after, or a week after, the food may be perfectly healthy. But it does cause a lot of consumers to do these vast unnecessary purges from their refrigerators and their cabinets.

LRK: Of course the supermarkets have to do that same thing. Unless there is a food bank set up or some way that this goes to a secondary market or to people in need, it's wasted right?

ER: Right. Food banks do get a lot of this close-to-expired food or even expired food. They understand that the food is still healthful and nutritious. Supermarkets move about 4 billion pounds of food from supermarkets and processors, so that is a great thing. But there is still a tremendous amount of food that just goes out into the Dumpster behind the supermarket.

LRK: You had a figure in the article that the average American wastes 20 pounds of food a month. That is pretty stunning.

ER: Yes, that is. If you ask anyone, "Do you waste food?" they are going to say, "No, I think I'm pretty good." But the garbage can doesn’t lie. I learned this when I was reporting my book about garbage when I quantified what was in there. An American family of four wastes 1,160 pounds of food a year, which is like throwing away $1,400.

LRK: Some of it is probably the kind of thing we don't think about: The doggy bag we took from the restaurant ends up in the back of fridge and we throw it away.

ER: Right. Things get hidden in there; they get lost. We have a lot of great intentions. We are told to eat a lot of fruits and vegetables, and this stuff is really seductive. It's this sort of biophilia: We want to buy it, we feel good about it, but then our plans change and we go out to eat and it gets lost in the back of the refrigerator.

Another part of the problem is that we really pay no penalty, or very little penalty, for putting the stuff into the trash can. We don’t realize what kind of environmental impact it will have downstream from us.

LRK: Now this is where you get into the invisible sides of food waste. What are they?

ER: The most important thing is that there are a lot of hungry people out there. We are producing a lot of food that isn't moving to these people. That’s paramount.

But I'm also very concerned about the environmental impact of growing this food. It takes an enormous amount of resources. Some people have done research and found out that just to grow the food in the U.S. alone, it uses 70 times the amount of oil that was lost in the Deepwater Horizon blowout.

We use vast quantities of fresh water to grow this food. Agriculture is the largest user of fresh water in the county -- in the world actually. We use chemical fertilizers and pesticides and then all this labor to grow 130 billion pounds of food that no one is even going to eat.