From The President's Kitchen Cabinet
March 6, 2017

Evolution of pho, a modern dish born of multicultural traditions 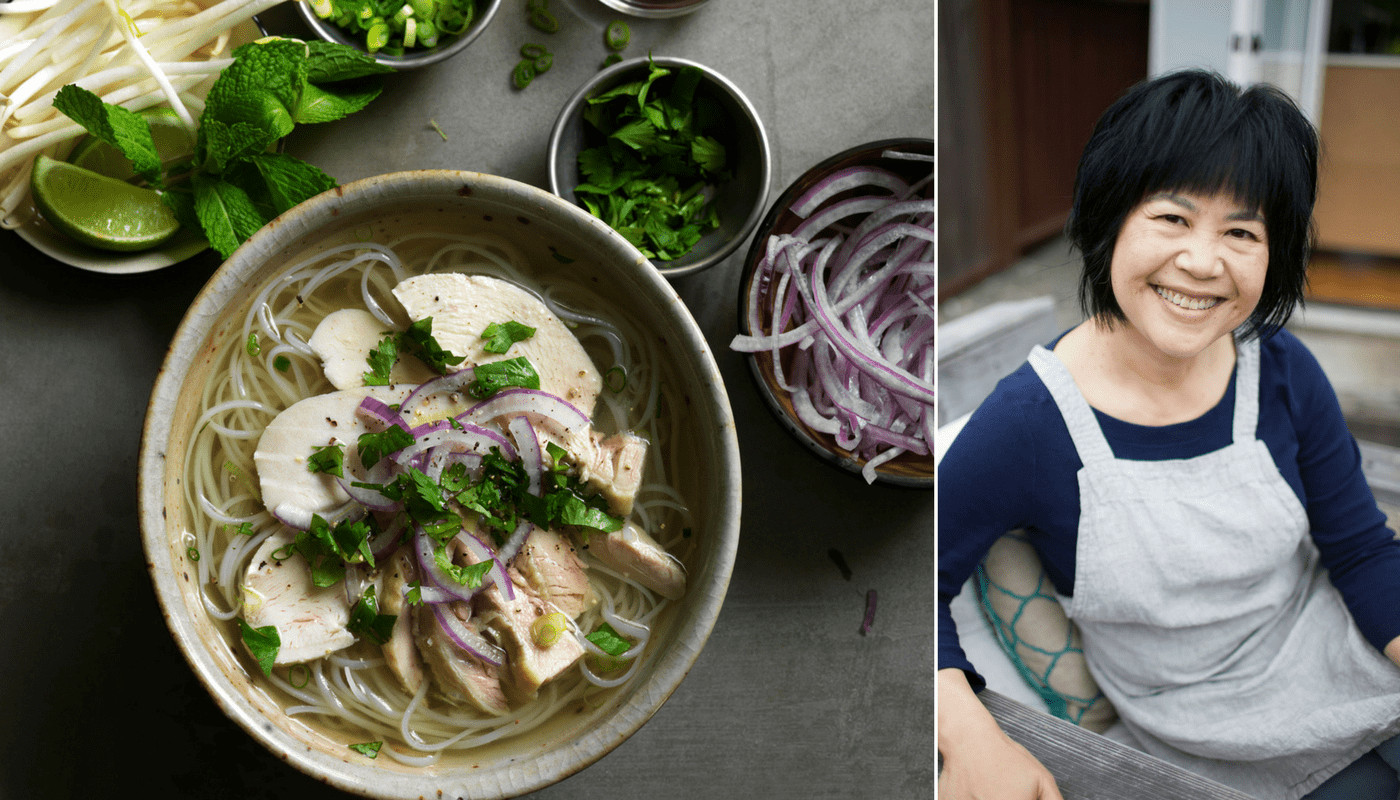 Some people call pho the national dish of Vietnam, but it's origins are somewhat recent. If you haven't attempted pho, you're in luck, because the great Andrea Nguyen has written The Pho Cookbook. Andrea currently lives in northern California, but she was born in and lived as a child in Vietnam. Andrea recently talked with The Splendid Table host Francis Lam about the history of pho and finding a taste of home in the US. She also provided recipes for Quick Chicken Pho and Seafood Pho, as well the accompanying Chile Sauce and Pho Garnish Plate.

Francis Lam: Lots of cultures have dishes that just make people go, “That's it. That's me. That is the food of my people.” Pho is certainly one of those dishes for many Vietnamese people. Do you remember your first bowl?

Andrea Nguyen: I sure do. In fact, I remember it so well because my family often reminds me of how when I was about five years old and we were living in Saigon, my parents took me to one of their favorite pho joints. I sat there as a chubby little five-year-old, chopsticks and spoon in my hands, digging into my bowl, working my way all the way down to the bottom and emptying it. Everyone thought that it was so wonderful. They marveled at this little kid. I was hooked on that soup.

FL: This is 1974. Only a year later, your family left Vietnam, coming to the United States as refugees. Obviously, there are a million changes in your life when that happens, but you seem to remember specifically that when you got here there were no pho shops to be found.

AN: Yes. We were very fortunate to have been able to flee Vietnam a week before the fall of Saigon. Like a lot of Vietnamese refugees, we had very little to bring with us. We traded personal possessions for freedom in America. My family settled in a little beach community called San Clemente, California.
But in gaining our freedom we lost access to pho shops. I remember feeling sad about that. So, we ended up making our own pho shop essentially in our home. I'm the youngest of five children. My mom would make pho up on Saturday so that we could enjoy it Sunday morning for brunch after eight o'clock mass.

FL: It’s thought of as a street food typically, right? Is this something that people make at home in Vietnam, or is it something you go out for?

AN: Some people make it at home, but most people go out for it. It is a street food. A lot of food in Vietnam is street food, in the sense that people have store fronts where you set up little plastic baby chairs and tables or wooden benches, and you just open up shop. It's as if you were to open up your garage door and welcome people in to eat and give you a little money. Not a lot of people made it, but my mother, along with other refugee friends of ours, would talk about the essence of good pho that they had in Vietnam, and they would trade secrets. Over the years, that kind of became the Vietnamese-American pho flavor, which was a little more sweet than savory because it's a Saigon-based pho broth.

FL: It's an unusual food in that it's one of the foods that has a fairly recent history and yet it is central to this cuisine in this culture. It seems the specific origin myth has lots of different interpretations of it, but it seems like there's a definite sense of where it came from and how it's evolved over time. Can you talk about that?

AN: People look at a bowl of pho and they think it’s an ancient food, but it's not. It was invented sometime around the beginning of the 20th century in and around Hanoi; it's a Northern Vietnamese food. If you look at a map of Vietnam, Hanoi is very close to the Chinese. China is right there with their neighbors, and they influenced Vietnam on and off for a total of 1,000 years. The first pho was invented probably by someone of Chinese origin and sold as street food to a lot of coolies who worked on the Red River. Vietnam was under French colonial power at that point. The reason why pho came about was that the French colonials started slaughtering a lot of cows. Cows are traditionally draft animals, so there were a lot of spare parts left: tough cuts and bones. The Vietnamese street vendors at that time had a water buffalo, rice noodle, and broth dish.  All of the sudden, there were these great sales on beef. The butchers were pushing a lot of beef, and the Vietnamese weren't used to eating beef, because the cows were supposed to be working in the fields for you.

The street vendors saw an opportunity; they switched the beef for the water buffalo. Eventually, they switched the round rice noodles -- the vermicelli type of noodles – for a flat rice noodle, which is what we identify nowadays with pho or pad Thai. They kept tweaking things, so that eventually we have pho as what we know it today. A lot of people think that pho is somehow related to French pot-au-feu –

FL: Because of the name?

AN: Exactly. They’re homophones and there may be something in the notion of how the aromatics – the ginger and the onion or shallot – are charred at the beginning. But aside from that, I really don't see a direct descendency from French pot-au-feu.

FL: It's interesting that it's this product of history: the fact of French colonialization and the fact that the French wanted to eat beef. You combine that with Vietnamese ingenuity to take what was the byproduct of that new butchery, and you created this iconic dish.

AN: It was a collision of cultures, people rubbing shoulders of different classes. It's always going to be a Vietnamese dish because it happened on Vietnamese soil under an unusual set of circumstances.

FL: If you're making pho at home, what should you know?

AN: On the first try, people want to make sure that they've got plenty of ginger and onion or shallot. We use a lot of yellow onion in this United States because it's affordable and readily available. The first recipe in the book for a Quick Chicken Pho – and there are two other quick pho recipes – is made for you to dive in and make pho on a weeknight. Really simple, but the trick there is to get that kind of sear, that char that I was talking about earlier on the aromatics – the ginger and the onion. When I talk about ginger, I'm talking about a chubby, fat, knobby ginger. I'm talking about the size of your big toe. A lot of people think chubby is like thumb-sized. No, big toe-sized!

AN: I would have no shame. The big toe is an important measurement.

FL: For charring, not just giving it a little caramel. You almost set it on fire, right?

AN: That’s for when you're making super traditional pho in a stock pot. If you're doing a quickie for 40 minutes just to put pho on the table, all I do is I cut up those aromatics and give it a little sear in a hot pot. When I'm charring it on an open fire, that's like going old-school cooking in a stock pot. There is also a middle path, which is to use a pressure cooker. There what you're doing, again, is searing the ginger and the onion. One of the things that I've seen in a lot of pho recipes published in the past is that they just throw the onion and the ginger into the pot. That little bit of searing or charring, it slightly cooks the aromatics and converts those sugars. It gives it a little bit of the sweet heat that is part of the foundation of a good Pho broth.

Francis Lam is the host of The Splendid Table. He is the former Eat columnist for The New York Times Magazine and is Editor-at-Large at Clarkson Potter. He graduated first in his class at the Culinary Institute of America and has written for numerous publications. Lam lives with his family in New York City.
Anzac Caramel  Chocolate Slices
Supe Me Domate
Lisa Donovan's Pie Dough
Kunafah bil-Jebn (Lebanese Sweet Cheese "Pie")