Excerpt from Oysters: A Love Story

by Tejal Rao
Listen: Excerpt from Oysters: A Love Story
03:53 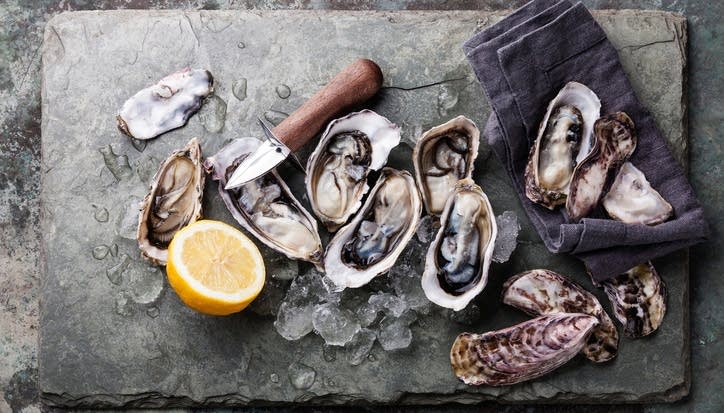 I met a man from Long Island — at a bar, by chance, a year after I moved to New York — and right away I liked him. We walked from the bar to a 24-hour diner in the East Village and got grilled cheese sandwiches and French fries and drank bad room-temperature coffee and talked for hours, until a stranger came over and asked if we would like him to officiate our wedding, right there, in the church of Veselka, at this sticky table by the bathroom.

By then it was light outside. I’d known the man for nine hours, and I was powered by an engine of pure enthusiasm. I said sure, why not, yes. Our waitress rolled her eyes but agreed to be the witness as we smeared an unofficial document with ketchup. Not long after, I learned that the man I’d diner-married had worked for many years opening clams and oysters in bars, and it had left him with a calm, clear-eyed appreciation. What I mean is, he didn’t get worked up when he talked about oysters, not like some people I knew. And he didn’t insist that I try one particular variety, grown off one remote island, with nothing but a squirt of lemon, of course, because anything more would be disrespectful to the oyster.

I liked oysters just fine, but not that much. When I ate them raw, by the dozen, they were occasionally delicious — fat and intact and salty, slipping out of pristine shells. Just as often they were nothing special. Like mouthfuls of bland, brackish jelly, or the sweat off coins from deep pockets, or the fermented milk of a mythical sea creature. They didn’t seem worth the hassle.

But there was something about the way he liked oysters — keenly and quietly, without fetish or hyperbole — that made me reconsider. We carried 100, along with a jar of chopped shallots in vinegar, to my friend’s apartment one New Year’s Eve. Later on, we ate them smoked, on crackers, and hot, in pan roasts and sandwiches, and when we visited friends in New Orleans, roasted in garlic butter, freckled with pulverized anchovies and cayenne pepper. Then we walked down the street with grease stains on our clothes, toward music.

When my parents came to visit the apartment we shared, I blitzed butter in a food processor with hot sauce, lemon zest and garlic, until the streaks disappeared. Outside, he sat at the table and talked and opened oysters with them while I lit the charcoal for my tiny travel-size grill. It took a few minutes for the butter to start bubbling, to make a tangy, fatty sauce with the oyster liquor, and for the meat to heat through. Then we ate in rounds, putting a dozen or so half shells on the grill every time we ran out.

What my mother wanted to know, after we’d emptied a bottle of wine, was if he and I ever talked about getting married. Not that she minded us living together, no, it wasn’t that, and not that it mattered these days, not at all. She wasn’t old-fashioned, she insisted, but it would be so nice to know more about my long-term plans. I told her the truth, that I didn’t have any long-term plans, but that the oysters on the grill couldn’t wait — oysters were like that.