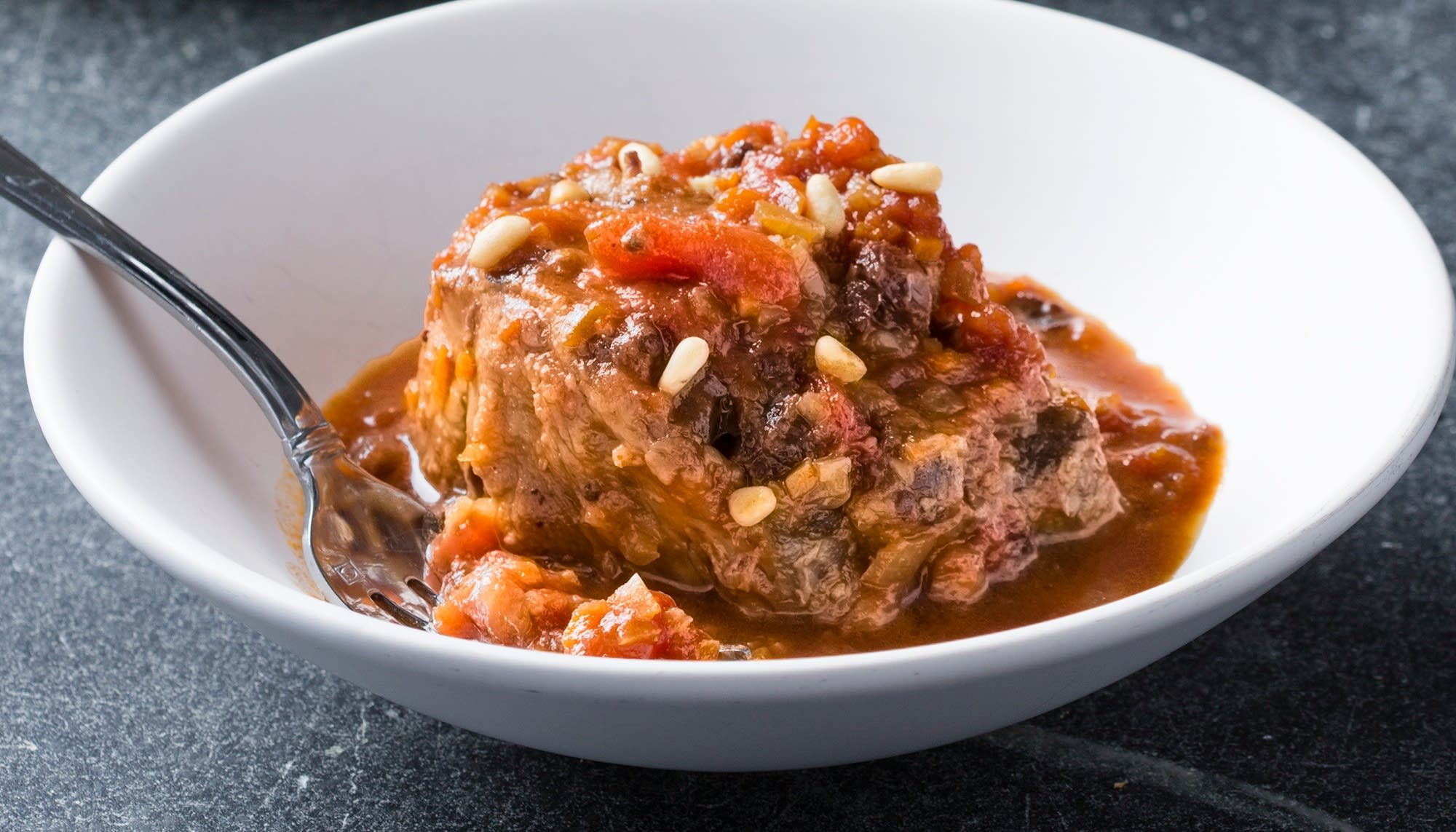 A classic Roman peasant meal, coda alla vaccinara is a lush braise originally prepared by slaughtermen (vaccinari) who were often paid with the undesirable parts of the animal. It’s from these parts, like oxtail, that they made delicious dishes and proved the underestimated worth of these inexpensive cuts. Coda alla vaccinara is still served in Roman trattorias. When simmered slowly—traditionally for 5 to 6 hours—the tough, fatty oxtails transform into meltingly tender meat coated by a rich, deeply flavored sauce which is thicker than that of a stew. Tomatoes, tomato paste, and a touch of wine, along with a sautéed soffritto (onion, carrot, and celery, cut large to have presence in the final dish) make the base of a sauce that’s elevated to lustrous as the oxtails braise in it. Sometimes chocolate is added, but we found the oxtails enriched the sauce more than enough on their own. Clove contributes comforting warmth and raisins introduce the agrodolce (sour and sweet) notes that Italians favor. To be sure our braise didn’t turn out greasy, we started by roasting the oxtails for an hour rather than quickly browning them on the stovetop; this allowed a significant amount of fat (about a half cup) to be rendered and discarded. We set aside the oxtails while we deglazed the roasting pan with chicken broth, added this mixture to the braising liquid, and then nestled the oxtails in the sauce. We found our oxtails needed 3 hours in the moderate heat of a 300-degree oven to become fork tender. After braising, we were careful to remove the fat (about another half cup) from the cooking liquid using a fat separator. A sprinkling of pine nuts is common and added crunch and visual appeal. Try to buy oxtails that are approximately 2 inches thick and 2 to 4 inches in diameter. Oxtails can often be found in the freezer section of the grocery store; if using frozen oxtails, be sure to thaw them completely before using.

1 Adjust oven rack to lower-middle position and heat oven to 450 degrees. Pat oxtails dry with paper towels and season with salt and pepper. Arrange oxtails cut side down in single layer in large roasting pan and roast until meat begins to brown, about 45 minutes.

2 Discard any accumulated fat and juices in pan and continue to roast until meat is well browned, 15 to 20 minutes. Transfer oxtails to bowl; set aside. Stir broth into pan, scraping up any browned bits; set aside.

3 Reduce oven temperature to 300 degrees. Heat oil in Dutch oven over medium heat until shimmering. Add onion, carrot, and celery and cook until softened, about 5 minutes. Stir in tomato paste, garlic, and clove and cook until fragrant, about 30 seconds.