How Thai food took over America

by Francis Lam
Listen: How Thai food took over America
09:04 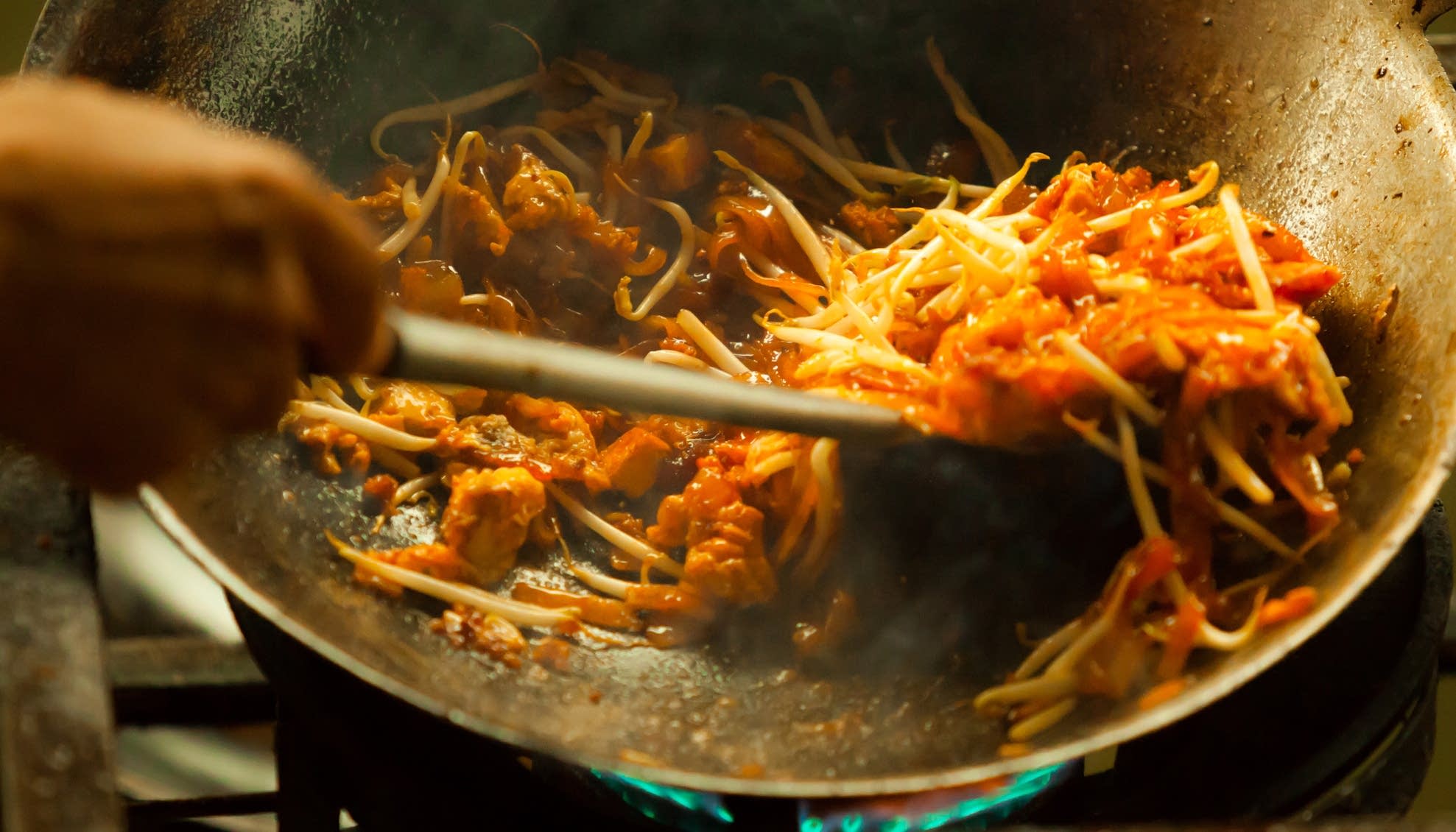 In the past 15 years the Thai population in America has doubled in size, and it’s a community that opens a lot of restaurants. In fact, if you’re just looking at the ratio to a community’s population, there are ten times more Thai than Mexican restaurants in the United States. We wanted to know how Thai restaurants first became popular in the U.S. and what fueled their spread across the country. You might be surprised to find the Thai government and Hollywood had a lot to do with it. Francis Lam talked with Padoongpatt, a professor of Asian and Asian American studies at University of Nevada Las Vegas, and the author of Flavors of Empire: Food and the Making of Thai America. Mark also gave us a list of suggested Thai restaurant that we've included below.

Mark Padoongpatt: I've read a couple of those stories, too, and that's absolutely true. The Thai government has been invested in this to promote Thai cuisine. It's part of their economic national development plan that was started around the early 2000s. They train chefs and export them everywhere around the world to open and work in restaurants. It’s to stimulate tourism to Thailand, but it's also an effort to standardize Thai taste around the world because the government feels like the different kinds of Thai food around the world has given it somewhat of a bad name. So, they're trying to standardize this Thai flavor.

FL: It's funny because you have people who always say the food you get in Thailand is nothing like what you get in America. But, it's sort of immaterial because what they're trying to do is establish a global baseline that may not have anything to do with what it seems Thai people actually eat in Thailand.

MP: Exactly. And I've heard some rumors of the government creating – or already having created – this taste robot to actually taste Thai dishes and to determine through some formula whether or not this is authentic Thai flavors. It’s also fascinating to me.

FL: But in your book, in your history, Thai restaurants in the United States are not here because the government has been sending them to us. Like you said, that has only been happening since the early 2000s. You say the story of Thai food in America actually begins long before that – in Los Angeles. How did it become popular there?

MP: I'll add this. Reading a lot of these stories about the Thai government's role is really important because I think it challenges that idea that Thai immigrants just pick up and go and open a restaurant on their own. It's important to think about the role that governments have. But, those stories only explain the number of Thai restaurants since the early 2000s. My book traces it to the 1980s when Los Angeles was a kind of crucible of the Thai food scene in the United States.

One is that it starts not when Thai immigrants come to L.A. but when the United States goes to Thailand during the Cold War in the 1950s and 1960s. And by the United States, I mean the U.S. military, Peace Corps volunteers, Fulbright fellows. Those U.S. citizens come into contact with Thai food in the 1950s and 60s, write Thai cookbooks, introduce it to suburban housewives back in West Los Angeles, and that gets the ball rolling.

And then within a decade or two you have a huge migration of Thai students coming to study in the Los Angeles area and around the country. They are the first ones to open Thai restaurants to feed themselves and to feed other Thai students. Then they decide to try to sell some of this food to Angelenos.

The other big turning point is the opening of Bangkok Market in 1971. Before the opening of the market Thai people are cooking quote, unquote Thai food, but they're really using Chinese ingredients as substitutes.

FL: With ingredients you’d find at a Chinese market?

MP: Exactly. So, they have soy sauce but they don't have fish sauce. They don't have any kaffir lime leaves. The Bangkok Market was the first to import Thai canned goods, Thai produce, and Southeast Asian produce. They tried to grow this produce in California. Ultimately, they end up in Mexico growing 90 percent of the Southeast Asian produce that comes into the United States. Those three moments gave rise to the Thai food scene in L.A. in the late 1960s.

FL: How did it spread across the country?

MP: If you look at where Thai people are settling in the 1970s, they're in California, yes, but they're also in Illinois and Michigan, Texas, and Washington, D.C. Because they're studying there, and those students then open up the Thai restaurants. Again, they create a market for Thai cuisine in these other areas. That's part of the story.

Then you also have in the 1970s, partly because of the Bangkok Market family, this conglomerate of Thai people who then start to recruit other Thais living in L.A. to open up restaurants in other places in Southern California, but also in other states like Montana. There was an organized effort there. The other factor here in terms of visibility is Tommy Tang; he was a popular Thai chef in Los Angeles who cooked what we might today call fusion Thai food. He opens up a restaurant in New York in the 1980s and become the first bicoastal Thai chef in the United States. That helps expand it nationally.

FL: The thing about L.A. is Thai Town is a little east of Hollywood, but some of the key restaurants that you list in the book are in West Hollywood. The restaurant Talesai is owned by my friend Kris Yenbamroong, who comes from the restaurant family. I remember him talking about how David Geffen used to come in as a regular for lunch, and he would bring in whatever pop star was on his record label at the time. They would have these megastars at the restaurants. It’s the 1980s, it's L.A., it's celebrity culture, and everyone starts to care about what Madonna wears, what Madonna does in her spare time, what Madonna eats.

MP: That's an important cultural phenomenon that gets overlooked a lot. How does Thai food become trendy? It has a certain cultural cachet. But, how did that develop? To explain that you have to look at L.A. in the 1980s and you have to look at what’s happening locally, specifically within West Hollywood.

A lot of the early restaurants in West Hollywood. Like you mentioned, Talesai is on Sunset Strip. Chan Dara is right in the heart of Hollywood. And you have Royal Thai Cuisine, which is also near the movie studios. These restaurants highlight just how many celebrities come in. Victor Sodsook, who ran the Siamese Princess in West Hollywood, wrote a cookbook and talked all about how Madonna came to his restaurant in the 1980s and had her own booth. In order to explain how Thai food becomes popular you have to talk about the raise of celebrity culture and L.A. in the 1980s, which had a very specific aesthetic. That connection to celebrity culture – Hollywood, the music industry, the movie industry – gives Thai food a certain cultural cachet that is part of that story of the popularization.

Mark Padoongpatt is author of Flavors of Empire: Food and The Making of Thai America, and is an assistant professor at University of Nevada, Las Vegas. Here is a list of Thai restaurants he loves (in no particular order):

Francis Lam is the host of The Splendid Table. He is the former Eat columnist for The New York Times Magazine and is Editor-at-Large at Clarkson Potter. He graduated first in his class at the Culinary Institute of America and has written for numerous publications. Lam lives with his family in New York City.
Anzac Caramel  Chocolate Slices
Supe Me Domate
Lisa Donovan's Pie Dough
Kunafah bil-Jebn (Lebanese Sweet Cheese "Pie")