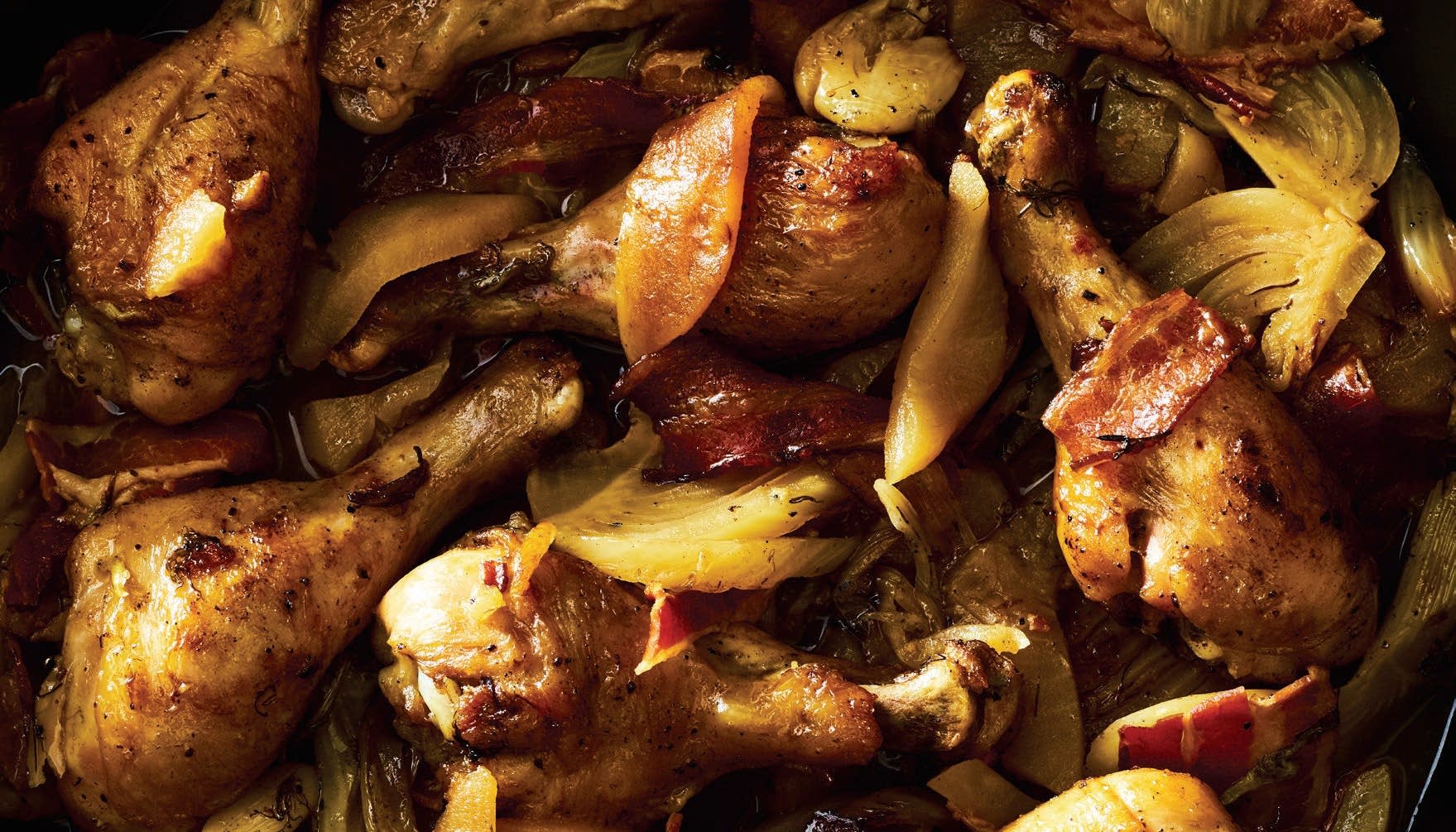 I pretty much always want something braised for dinner, and as much as I love braising the legs of a cow, pig, or lamb, they take a few hours to get tender and thus aren’t always the best option for a weeknight. A chicken’s legs, on the other hand, braise in less than an hour, so you can have a righteous braised dish any night of the stupid week! This super simple stew is inspired by autumn flavors, using bacon, fennel, and apples (both fresh and in hard apple cider). You could totally swap out the hard cider if you’re not into the alcohol, but I would use chicken stock or water rather than apple juice or fresh cider, either of which would make it a little too sweet. There’s something about the smoky, salty, sweet, and slightly bitter elements of this dish, cooked down with chicken that is just starting to fall apart, that makes me want to smoke cigars and write a novel, but I don’t actually like cigars, and if I wrote a novel, it would just be a fictional cookbook, so it’s probably better to stick with cooking chicken for now.

2. In a small sauté pan over medium heat, cook the bacon until brown and a little crispy, 7 to 10 minutes. Remove the bacon from the pan with a slotted spoon and set aside on a plate.

3. Pour the remaining bacon fat into a large ovenproof sauté pan or Dutch oven and put it on the stove over medium-high heat. (We are using a fresh pan to prevent the chicken skin from sticking to the bottom while crisping up, which is annoying.) When the fat starts to smoke, add the drumsticks and cook until nicely browned on all sides, about 5 minutes per side.

4. Add the garlic to the pan and cook until lightly browned and fragrant, 3 to 5 minutes. Add the bacon, fennel, apples, and salt and give everything a good stir. Continue cooking on high heat for 5 more minutes, until the fennel is looking translucent and is soft to the touch, and the apples start to caramelize. Add the cider, scrape the bottom of the pot to deglaze, bring the mixture to a boil, turn off the heat, and transfer the pot to the oven, uncovered.

5. Cook the chicken and vegetables for 50 to 60 minutes, or until the top of the chicken looks dark and the liquid has reduced by half. Really, you could pull it out after 30 minutes (or as soon as the chicken is 165°F/75°C), but I like my drumsticks to be falling apart. Serve with roasted potatoes alongside.