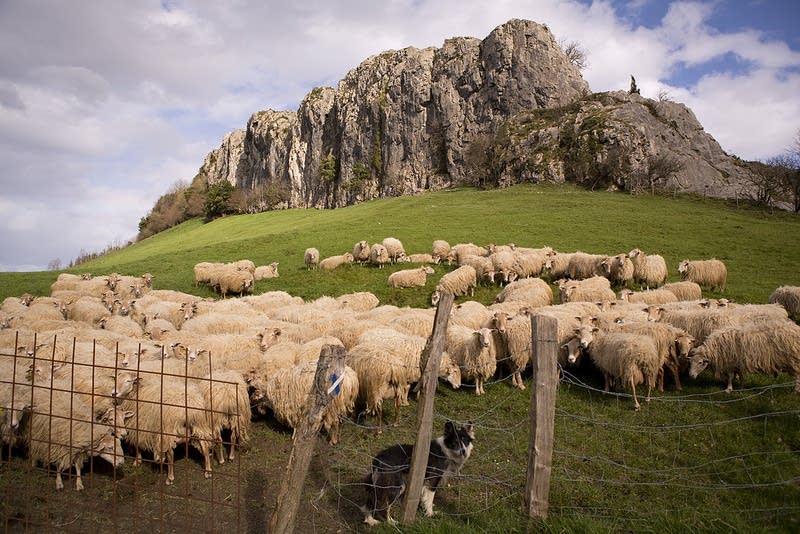 The Perennial Plate could give you wanderlust really quickly, at least if you're curious about food. The weekly, online documentary series follows two people who travel the world learning -- and filming -- how people really eat in their home countries.

The duo, chef Daniel Klein and camerawoman Mirra Fine, find their way into home kitchens, onto farms and fishing boats. And they have a goal: 12 countries, in-depth, in 18 months. They have just returned from the Basque Country in Spain, where one sheepherder is trying to continue the region’s tradition of cheesemaking.

Daniel Klein: We just got back from Spain and the Basque Country. The Basque Country is an autonomous area in Spain that has one of the oldest languages in the world. They sometimes blow up bombs to try to gain their independence, but culinary food is the most important thing in their culture along with their language and their land.

LRK: There are some pretty famous cheeses coming out of the Basque Country, which sits between Spain and France. I understand that you got to a particular cheesemaker.

Mirra Fine: Idiazabal cheese is known for coming from the Basque region, and it is also known for coming from a specific sheep, the Latxa sheep, the beautiful sheep with the long hair. We found this man whose name was Urtzi and he was a newer sheepherder. Most sheepherders have been doing it for generations. It’s actually one of the oldest professions in the world. But similar to American farmers these days, most of the Basque sheepherders are older than 60 years old, so it’s at a risk of eventually disappearing. The interesting thing about Urtzi is that he didn’t come from a sheepherding family or a farming family, he decided that he wanted to be a sheepherder because he trained sheep dogs.

DK: It was really cool. To show off his skills, he actually herded chickens for us. Imagine this cute little shepherd dog running around in this apple orchard.

MF: Just by him whistling or making little noises, the dog would run around. It was really, really cool.

DK: So here’s this setting of beautiful green grass and these stone mountains hanging over us.

MF: These beautiful rolling hills and gorgeous sheep. There was a double rainbow.

The other interesting thing is that traditionally farmers used to make Idiazabal cheese by hand. Lately, large companies have been buying sheep milk at very low prices and making mass-produced Idiazabal cheese. So it’s harder for these smaller farmers who are trying to do it the handmade, artisanal way -- that’s what Urtzi is trying to do.

DK: There is this real farmstead cheese, which is when the herder also makes his own cheese. It’s a small flock of sheep that they milk in the morning and the evening, and then make the cheese the next morning after it has cooled.

MF: Which is how it was traditionally done up in the Pyrenees Mountains. These sheepherders would stay up there through the spring and summer, and then keep their wheels of cheese next to the chimneys of their mountain house; there they would age and they would also get smoked.

LRK: So what does the cheese actually taste like?

DK: How can we describe it? I think sheep’s milk cheese is always a little sweeter. Mirra disagreed with me a little bit.

MF: I think they are a little bit more buttery. There is definitely something special about sheep’s milk cheese. Idiazabal is very buttery and nutty and has a slightly smoky flavor sometimes, sometimes it doesn’t. Urtzi’s cheese, the one we tried, was not smoked.

DK: You can compare it to a manchego -- I think I like it a little bit better -- but they have a similar quality to them. You can have this young sheep’s milk cheese that is a little lighter. You can age it several years and it starts to get dry and salty. You can see shaving that on top of something instead of eating a piece of it.

LRK: He hasn’t picked an easy profession; as a sheepherder, you are talking about literally herding sheep over miles and miles. You’re outdoors constantly. You’re a caretaker. What a profession.

MF: It is a hard profession. He did tell us that it wasn’t easy and that he wasn’t sure if he was going to be able to do it forever. But his love for animals is why he does it. He said the relationship between the sheepherder and the dog is extremely important; it’s a relationship of respect and trust. With the sheep, he cares for them and they in turn give something back to him. He was saying that there are people in the area who care for animals as though they are cars. They treat them as objects and that’s not how animals should be cared for. It was very sweet.

DK: You treat the animal well, it gives you the milk. It’s this beautiful exchange.

It’s a hard profession. Not only with being outside and the constant work, but also pretty much everyone we talked to in Spain talked about the financial situation there and the difficulty in getting jobs and now selling expensive cheese. This is a special product: It is not the block of orange cheddar that you put on your sandwich. This is something that is really fine and does cost a little bit of money. In the financial situation there, he has invested a lot of time and a lot money and is struggling to make ends meet.

We talked to several producers of different things in the area; everyone had this strong desire to keep these really beautiful traditions alive. I hope that he continues. I know that in the Basque Country, these beautiful examples of cheese and other things will stay alive.